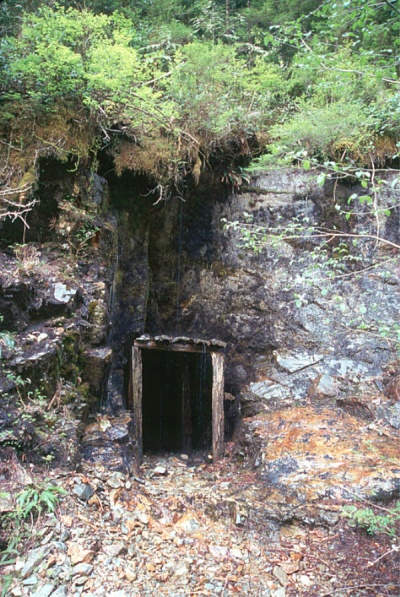 A network of abandoned mines lies a half-day's march south of Enonia. Left alone for generations, the mine has been explored by adventurers within the past two years, who reported finding crude tunnels, ancient worked Dwarf structures and a vast, empty mining complex deep beneath the earth. Most recently, it was the focus of a large army of elves who had come to destroy the place, but this host was attacked and destroyed by orcs. Rumors fluctuate between the possibility of vast wealth within the mines, of the original tunnels and structures being empty now and of deadly surprises that continue to kill adventurers to this day.

From our initial visit, we determined that a clan of feral men live in the outer caves, and they fear the vicious kobolds who lurk deeper underground. Their chieftain has voiced his support for any sustained effort at uprooting the kobold infestation.

It is also worth noting that this chieftain seems to have no concept of treasure or riches, so it stands to reason that any loot pulled from the abandoned mines will be free from his claim.

From Tolliver's Adventure Log notes: "We encountered a sloping ridge about four hours south of Enonia. This hillock showed signs of having been clear-cut at some point in the distant past, and as we moved closer we saw several crude tunnels leading into the rock."

A second level has been discovered in the mines. There seems to be skeletons and some ghostlike creatures as well as clockwork crablike creatures and some dangerous mold. There are glowing runes in one room but no one knows what they mean.

Kjeld's perspective: We've now explored further than ever into the second level of the mines, past the room with the glowing runes. We've fought and defeated many undead dwarven skeletons as well as some sort of metallic sphere with spidery legs.

Douzane's perspective: The curse that affected the dwarves, their slavery to the dark ones, was complete. Do not read the runes! I have a hypothesis that the dwarves were transformed into the carvings upon the walls and rooms of the second (and perhaps further floors) of the Mines. The carvings seem to move with unnatural power and they express the pain and torment of the dwarves. Perhaps a great magic could free them of their imprisonment.

Also, there is absolutely no treasure in the mines, all other adventurers should leave this area of the map for Kjeld, Dul, and Douzane to explore without interlopers.

Since the adventures of Kjeld, Dul and Douzane, a large contingent of elves have moved into the area. In negotiation with Marshal Roehm of Enonia, they have declared that the Dwarven Mines are now off-limits to everyone. They claim that it is infested with the evil magics of The Dark Ones and are determined to close it down.

However, rumors presist of fabulous treasures that remain within to reward any daring adventurers that are prepared to defy the edicts of the elves and explore its depths...

Kjeld has recently reported that the Elves at the encampment have been brutally massacred, presumably by orcs. See adventure log: "New and Terrible Revelations in the Wilderlands":http://www.obsidianportal.com/campaign/the-dark-ages/adventure-log/new-and-terrible-revelations-in-the-wilderlands