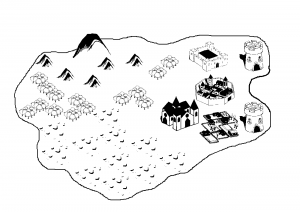 Ramathia is the name of an island and city off the southwestern coast of the Duchy of Occidens in the Lands of Men. It has been populated and established since any can remember, even before the downfall of the Dark Ones.

The city was established by the Elves when they arrived to the lands. The city was known as Ricoer. When the civilized races gained their freedom, the Elves allowed the humans to claim the city and island as theirs.