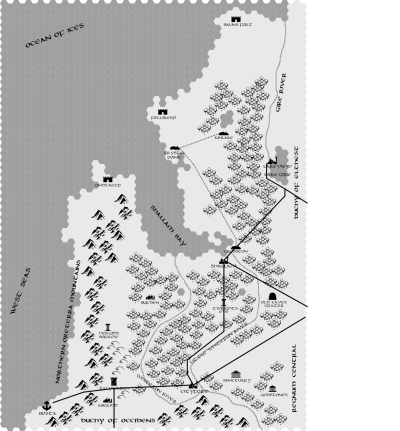 The Duchy of Corridin is one of the older inhabited areas of the Lands of Men, although it is also one of the least populated areas. A large portion of the Duchy remains as wild lands. Many older structures remain as ruins, remnants of the time when the civilized races were enslaved by The Dark Ones. The Duchy is ruled by the Iame family. The current ruler is Duke Grant Iame.

The Duchy is located in the northwestern corner of the lands, bordered by the Gire River on the east and the Whiterun River to the south. It borders the Duchy of Elthest and Duchy of Occidens.

The ducal seat and Iame lands are located in the city of Shallam, located at the mouth of the Little Whiterun River as it empties into the Bay of Shallam. The Duchy has had several Kings from the Iame family, though none of recent history. Most of the population of Corridin lives on the eastern borders of the Duchy.

Similar to the Duchy of Elthest, Corridin contains strange ruins and old watch towers that trace back to the days of slavery and the rebellion. There are strange shrines, old monuments of long forgotten heroes and even a large crater with a myriad of tunnels and caves within.

Of more ominous note, there have been many Orc incursions into the duchy recently from along the Northern Oreterra Mountains. They have been largely unopposed as they are staying in the forests, for now, but a good portion of the Duchy is in Bestial hands. The Duke does not have the manpower to mount a long campaign to flush the orcs from the forests. They have not attacked the port city of Bosta, but it is largely cut off from the mainlands now due to the mountains and orcs within. 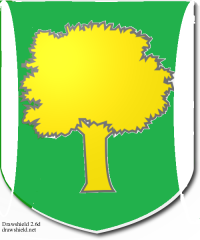 Heraldry of the Duchy of Corridin