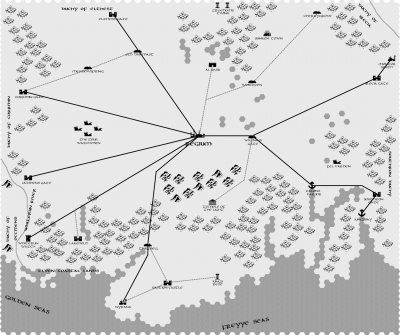 Regnum Central, also know as "The Lands of the King", or "The Central Kingdom", are the lands that are directly controlled/owned by the King and that support the workings of both the royal city of Regium and the governing bodies of the lands in general. Regnum Central is a large area of land, surrounded by five of the seven duchies, and by Elf-controlled lands and seas to the south.

The majority of the land is open grasslands, with the southern area dominated by thick forests. The Monarch Mountains are an unusual range of mountains in the middle of the lands - suddenly starting and ending without any of the natural foothills that one sees from the Oreterra Mountains or Sithasten Mountains.

Each of the five surrounding duchies has a "gate" at the road leading from the duchy into Regnum Central. The road is guarded by a grand castle that is maintained and manned by soldiers of the Kings Legions and regular Kings Army, to serve as needed within the Central Kingdom or in the Duchy it is associated with.

The current King is Julian Felix V, who is said to have snatched the throne in a daring move (or a too-convenient grab) once King Yuligan II had died suddenly. Along with the normal Kings Army and Kings Legions, there are a great many troops from the Southron Duchy installed in Regium.