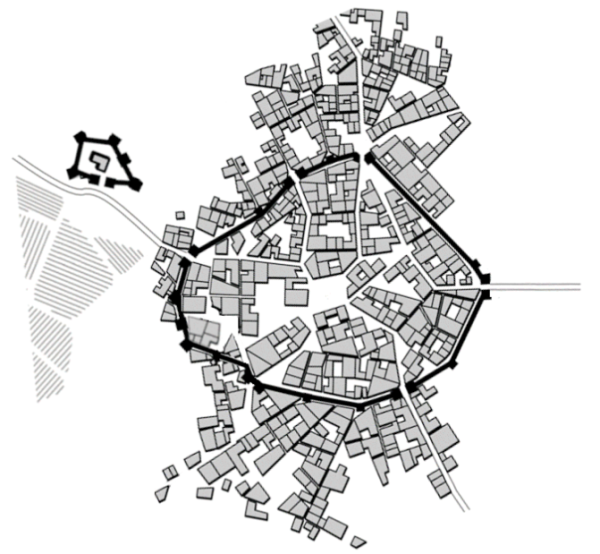 The small, rough and tumble town that serves as the base and starting point for the PCs.

Once a sleepy farmer’s market on the road to Irecia, within the Duchy of Irecia, the town has become a bastion of hope and defiance in the face of the Bestials and worse coming from the east. It is well populated. There is a local market square for the farmers around the area and a temple for the Church of the Light.

Well traveled roads from Rodorin to the west and Montor North to the southwest come into the city. More rural roads lead to Old Fawn to the north and Riverton to the south. The remnants of the Dalewoods Road lie on the eastern side, heading through the Dalewoods and the formerly populated eastern part of the Lands towards Irecia but nobody travels that road anymore.

The Enonia Keep is on the western side of town.

Old maps point to the Dalewoods Inn, a wayfarers’ hostel that used to welcome visitors with a roaring hearth and mugs of ale, as a point of respite along the route. Today, the ruins have been transformed into a fort that has changed hands between the Orcs and Humans twice.

The former city of Irecia lies two days travel down the road, but nobody visits there, for it is said that the Damned now hold sway and the orcs surround it, intent on taking the former capitol of the Duchy.

To the north, west and south are populated lands and keeps of the Duchy of Irecia that are still held by humans. The nearby towns and villages (within a day’s walk) are:

To the north and northeast are the Dark Woods. Many attacks by Goblyns and other strange creatures come from here. Further to the northeast, roughly a ten-day's travel, are the Sithasten Mountains.

To the southeast lie the rolling hills and grasslands of Valenia. Once beautiful farmlands, now only the rotting remains of those farms and bestials live there.