"Lands of Men" (Etinerra in the Old Tongue) is the name given to the land mass which is populated primarily by humans, with smaller populations of Elves, Littlelings and Dwarfs comprising the remainder of the "Civilized Races." Orcs, Goblyns and Ko-balds also live on this land mass, though they are associated with the so-called "Bestial Races." 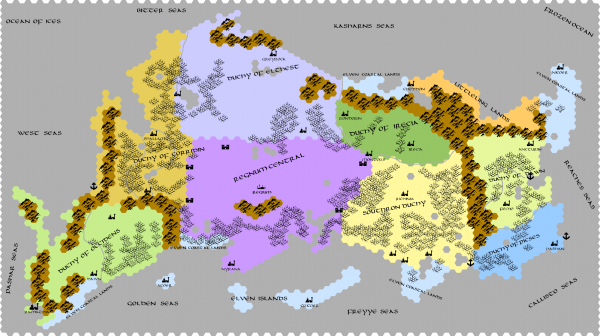 The Lands of Men

The Duchies: Duchy of Irecia | Duchy of Occidens | Duchy of Elthest | Duchy of Corridin | The Southron Duchy | Duchy of Dawn |Duchy of Pisces

The land mass is huge, requiring almost an entire year to cross it's breadth, and almost half a year to travel from its northermost point to its southernmost point.

The majority of land is fertile grasslands, with forests and woods prevalent mainly to the south, west and eastern areas. There are two major mountain ranges, the Sithasten Mountains to the east, and the Oreterra Mountains to the west. Many lakes dot the lands and there are seven major rivers that lead from the mountains to the oceans.

The weather is temperate. The seasons of a year affect all of the Land in similar fashion, although there are local differences. The south and southwest see more rain than snow as compared to the north and east. The spring and summers can be hot across all of the Lands, but they are short compared to the fall and winter seasons. (See the Campaign Calendar).

When the Dark Ones were defeated by the combined forces of the Civilized Races, humans took the majority of lands to rule and hold. Elves claimed coast lands and islands, mainly to the north and south. The Littlelings claimed a small section of land to the northeast and were given permission to travel nomadically across other lands, setting up clan camps where they wished, with agreement from the local rulers. Dwarfs were also given permission to travel nomadically across the lands, but they mainly stayed to the rougher terrain and mountains.

Humans divided up their lands into seven duchies and one central kingdom area, known as Regnum Central. The King and royal family resides in the Royal City of Regium. Each duchy is controlled by a noble family, who may or may not reside in that Duchy.

Scholars and mages all believe that there is more to the world that the Lands of Men. They are not quite sure of the nature of the place they live, but it has been given the name "Tellurus." It is believed that there might be more lands across the oceans, especially wherever the Elves homelands are, but no sailors, nor mages, have found a way to them.